The Dodge Ramcharger went through three (3) generational changes durings its 28 model year run.  While the first and second generations (1974 – 1993) were offered throughout North America the third generation (1999 -2001) was only offered in Mexico.

The Dodge Ramcharger was developed in response to the popularity of the highly popular Chevrolet K5 Blazer and Ford Bronco.  Like these other large SUVs the first generation Ramcharger (1974 – 1980) featured a removable hardtop for an open air riding option made popular by the Willys Jeeps and CJ Wranglers decades earlier.  During this first generation of the Ramcharger a rebadged clone called Plymouth Trailduster was also offered by Chrysler.

The original intent of the Ramcharger, known as the “Rhino” during development, was a for full time 4×4.  This however changed in the second model year when a two wheel drive option was added in 1975.  Built on the Chrysler AD platform, the Ramcharger followed suite with the D-series pickup redesign and thus the 2nd generation Ramcharger featured a steel welded top.

The Ramcharger was outfitted with a variety of V8 engines most commonly the Chrysler LA but later replaced by the Magnum 360.  Listed below are the various engines that were used during the Dodge Ramchargers production run. 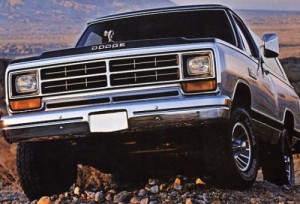 Like the Ford Bronco and Chevy K5 Blazer, the Ramcharger was heavily used in off-roading activities.  This was true for moderate and dedicated use.  In most cases this involved installing an aftermarket lift kit and oversized tires for better off-road performance.  On top of this Chrylser included many heavy duty features stock that made the Ramcharger a good base for building a 4 wheeling rig.  This included the The NP435 “granny gear” 4 speed manual transmission the was most common in 4WD models, as well as the close ratio version, the NP445.

First generation Ramchargers also featured a full-time four-wheel drive NP-203 transfer case.  This was later replaced by the part time NP-208 and eventually the NP-241 for the third generation.  Heavy duty Dana 44 axles were also standard which not only supported the weight of the Ramcharger but also allowed for larger oversized aggressive tires and heavy off-road abuse.  Various locking hub configurations were available throughout the years with the Center Axle Disconnect (CAD) eventually replacing them in 1984.  This carried on to the end of the Ramcherger however the vacuum switch would commonly fail, leading many owners to replace with electronic or air lockers.

Discontinuation of the Dodge Ramcharger

In 1998 Dodge released the Dodge Durango to stay with the trends and the meet the demand for more popular four door SUVs in the United States and Canada.  These were more mid-sized SUVS such as as the Jeep Grand Cherokee and Ford Expedition.  The Ramcharger however was very successful in Mexico so a new Chrysler BW platform model was introduced for the Mexican market only following the end of the Mexican 2nd generation Ramcharger which ran from 1988 to 1996.

Despite being the Ramcharger in nameplate, the third generation Ramcharger more closely resembles the Durango in body style.  This Ramcharger also featured a rear hatch design from the 1996-2000 model Dodge Caravan and a small folding seat in the cargo area.

Have anything else to add?  Anything we missed?  Let us know in the comments section below…

If you have found this site useful consider donating to help support its continued development.

To list a Ramcharger for sale on our site use our Ad Submission page by clicking the link below.